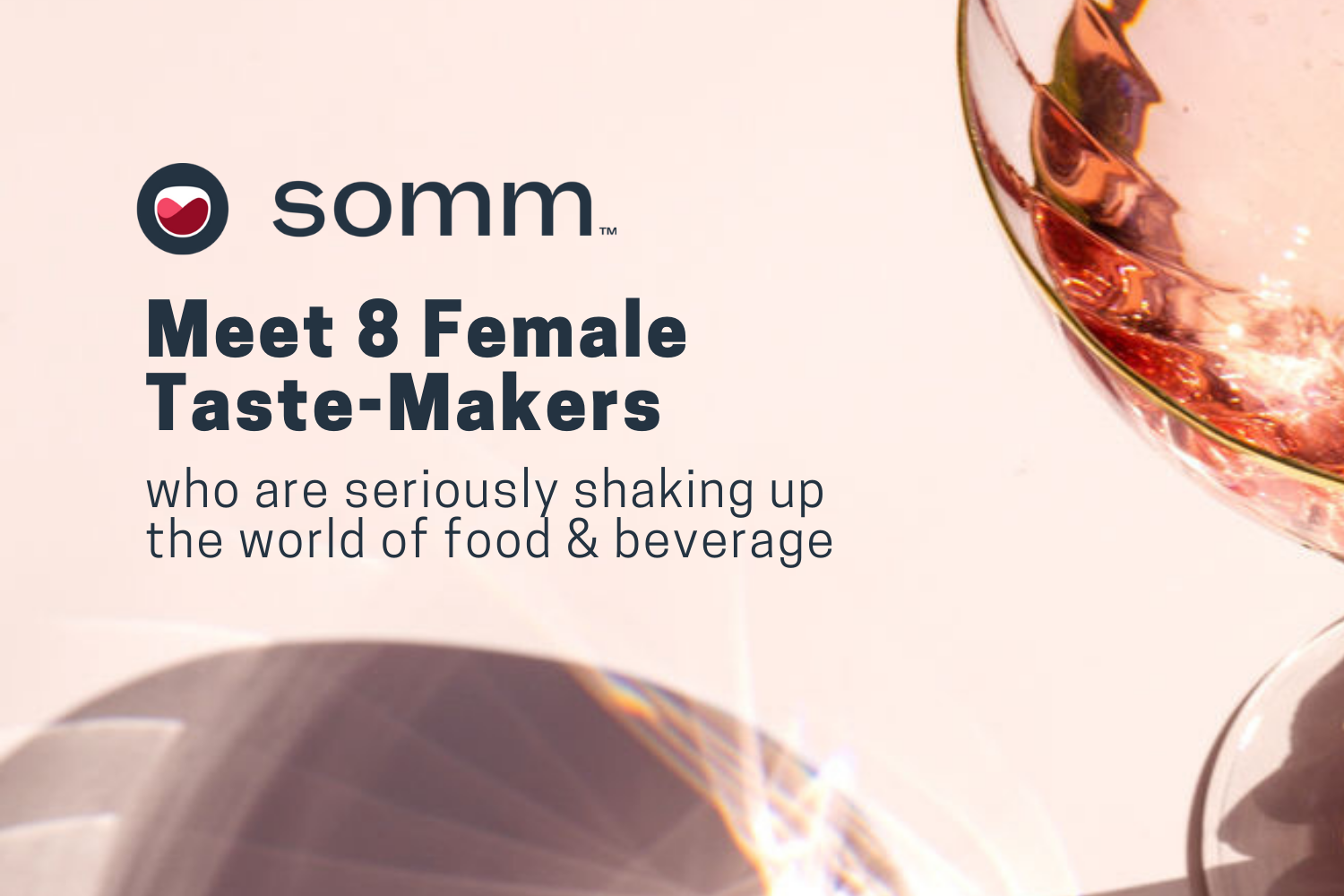 Meet the female Taste-Makers who are redefining the world of wine, food and spirits (an industry that brings us so.much.joy!)!

The world of hospitality is rooted in the elements of service, storytelling and delivering memorable moments into people’s lives through the experiences offered and the products delivered. During this Women’s History Month, we are excitedly shining a light on 8 women who are blazing profound trails in the broad-ranging hospitality industry and creating a new and exciting conversation around the world of food and drink.

We are thrilled to collaborate on this blog with our friends at Somm™, founded by visionary Jennifer Tremblay and whose team is 70% female—quite the impressive feat in the technology industry! So today, we invite you to pour a glass and join us in celebrating these inspirational innovators!

Considered to have ‘the best job in the world’, Élyse Lambert is a renowned Master Sommelier—a distinction held by only 5 people in Canada and only 2 of whom are women! After graduating with a degree in hotel management in 1998, Élyse narrowed her focus to an area of hospitality she truly felt connected with: wine. She then embarked on her journey to becoming a Master Sommelier—a journey that would take her around the world and be filled with colourful stories and experiences. In 2009, Élyse travelled to Buenos Aires and won the title of Best Sommelier in the Americas—the first woman to win an international title! She continued to break new ground and in 2015 was awarded the title of Best Sommelier in Canada, and in 2016 was named the 6th best Sommelier in the world! Élyse is currently an ambassador to the industry-leading app Somm™ , which gives you a sommelier in your pocket and unlocks incredible hospitality benefits through their lifestyle membership program, Somm Cru and Grand Cru!

This is a story about one of the world’s fastest growing and celebrated Whiskey Brands that have the makings of a Hollywood movie—prompted by the curiosity-turned-passion of its female Founder and CEO, Fawn Weaver. In 2016, Fawn came across a New York Times article recounting the little-known story of Nearest Green, a formerly enslaved man who taught Jack Daniel (yes, the one you are thinking of!) how to make Tennessee Whiskey. After going down a rabbit-hole of curiosity into his story, Fawn soon found herself purchasing the very farm in Tennessee where the legendary teachings between Nearest and Jack first took place. From there, Fawn got to know the descendants of both men and made the bold decision that the best way to honour Nearest’s legacy was to create a bottle of the Tennessee Whiskey in the same way Nearest did in the late 1800’s. Fawn jumped with both feet into an industry she had absolutely no background in, which was dominated mostly by white men, and Uncle Nearest soon became the most-awarded American Whiskey or Bourbon of 2019 and 2020! Fawn also happens to be one of Taryn’s favourite people to follow on the ‘gram!

The story behind this brand is another one that seems like it came directly from a movie script. Sisters, Robin and Andrea McBride, both grew up in iconic wine regions—Monterrey, California and Marlborough, New Zealand—on opposite sides of the world from one another. For half their lives, they thought they were only children, until finally discovering the truth and learning about one another. The uncanny connection of their shared love for wine soon culminated into founding The McBride Sisters Wine Company, one of biggest black-owned wine companies in the United States. Since 2005, The McBride Sisters’ mission has been clear (and one that we completely have fallen in love with!): to transform the industry, lead by example and cultivate community, one delicious glass of wine at a time. If you want to learn more about their story, this podcast episode tops our list as one of our all-time favourites!

The name Janet Zuccarini is one that has been fabled in restaurant folklore for over a quarter of a century, with a track record of innovation and massive success! As the sole owner and driving force behind the Gusto 54 Restaurant Group, Janet stands out as a leader in the restaurant industry, curating innovative and delicious dining experiences on a global scale. The empire that Janet has built includes a collection of restaurants in Toronto, as well as expanding to California, where she earned the tremendous accolade of her LA-based Restaurant, Felix, being lauded as Esquire’s #1 Best New Restaurant in America. She continues to break new ground, most recently opening up Gusto Green in downtown LA—in the midst of a pandemic.

Chef Nuit Regular is one of the most influential chefs in Toronto and her distinguished career in the restaurant industry is one celebrated for bringing the distinct flavour of Northern Thai cuisine to Toronto and across Canada. Notable restaurants, including PAI Northern Thai Kitchen, Kinn, Sabi Sabi and Sukho Thai, all derived from her humble beginnings in Thailand. Chef Nuit’s flavourful influence has exponentially grown across Canada, where she consults for restaurants across the country, releasing a cookbook and has been a judge of the Food network’s Wall of Chefs.

A ‘taste-maker’ in every sense of the word, Evelyn Chick is a global hospitality talent, bar and beverage consultant, cocktail and spirits educator and entrepreneur. With a visionary take on the world of bar and beverage, Evelyn is an advocate for the continued growth and sustainability of an inclusive and integrated food and drink community within the Canadian market. During the pandemic, Evelyn founded Evelyn Chick Projects, her umbrella company that started as a passion project to provide a creative hub for drink enthusiasts and grew into a full suite of offerings, including consulting, events curation, premium delivery service and more.

Katherine Melin is the Founder and Directing Principal of Apparition Wines—a Toronto-based wine and spirits agency and Somm Cru partner that delivers unique wines from all over the world to Ontario. Launched in 2012, the passion behind the agency lies in beautifully made wine and spirits, their culture and the continuum of people who relate to them—from those who cultivate the soil and organic material necessary for the making to those who seek out quality wines and spirits and consume with awareness. Apparition’s passion and its application have been widely recognized, receiving accolades including – Best Fine Wines & Spirits Agency 2022 from Corporate Vision Magazine Canadian Business Awards and Most Innovative Ontario Wine Agency & Most Industrious Wine & Spirits Businesswoman 2021 by Global Insight Business Awards.

To continue the celebrations for Women’s History Month, Somm is spotlighting their network of talented female partners and staff for the next few weeks. We invite you to follow Somm on Instagram at @somm.app for compelling content that spotlights the women of Somm and others in the industry, exciting interviews and upcoming giveaways!